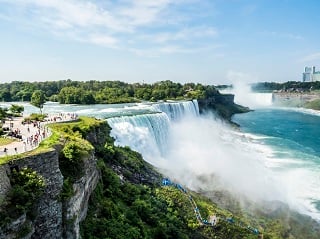 Today we will enter Hershey Town to visit Hershey's Chocolate World , see the whole process of chocolate production. Then we will go to visit Corning Glass Museum. We will also go to visit the Watkins Glen and Finger Lakes (*Considering of the time/traffic/weather). After that, we'll drive to Niagara Falls and have a chance to take the Colorful waterfall tour.
Standard Hotel: Comfort Inn / Day Inn /Red Roof Plus or similar
Day 3

Today we will visit the Niagara Falls where we will take the Touching Niagara Fall (Summer: Maid of Mist; Winter: IMAX Movie). Afterwards, we will continue to Boston. We will take a World-famous university tour including the Harvard University and passing by Massachusetts institute of technology. After we arrived at Boston China Town, you can enjoy Boston Lobster Meal on your own expenses. In the evening, we can also choose to take the Boston Night Tour.
Standard Hotel: Comfort inn/Best western/Quality inn or similar
Day 4

In the morning, we will first see the World-famous Building of Boston. Then brings you a deep tour of walking to Boston Freedom Trai. Afterwards we will take a Revolutionary Cradle tour. For those guests who leaving the tour from New York, we will exclusive offer free attraction - Yale University. Please refer to the "Departure & Return" for more details about pick up and drop off.
Close All Expand All