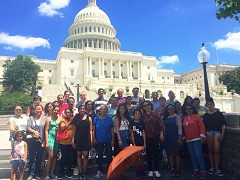 Today, we will go to visit Hershey Chocolate World and take a ride to see the whole process of chocolate making. Then we will move to Army Barracks to enter the Valley Forge National Historical Park and visit Washington Memorial Church, National Patriot Clock Tower. We will also take a picture under the National Monument Arch. After that, we will go to BAPS Shri Swaminarayan Mandir, which is the largest Indian temple in the world.
Close All Expand All